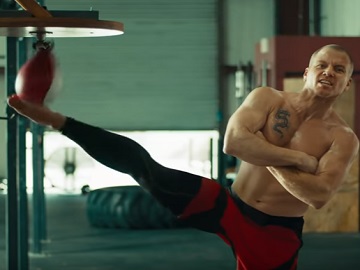 Planet Fitness continues to market itself as a “judgment-free” gym in a new ad.

The spot features a guy hitting a speed bag with his legs, arms crossed over the chest, saying he wouldn’t go at Planet Fitness. “Work out at Planet Fitness? Isn’t that the place with the cardio machines and the TVs? No way, bro. No way this bro would ever go there, bro. So you won’t be seeing me there any time soon. No way,” he says while hitting the speed bag from all kinds of unlikely positions.

The voiceover ends the commercial by saying that Planet Fitness is “a place for everyone else” and adding the gym’s tagline, “The Judgment Free Zone”.

Planet Fitness promises its potential members a “non-intimidating, welcoming and supportive environment”, that” fosters a sense of community,” and offers a series of benefits including a spacious and clean facilities, friendly staff, always ready to support you, as well as the chance to take a small group fitness class, check out our 30-minute express circuit or create a customized workout plan, all for free.