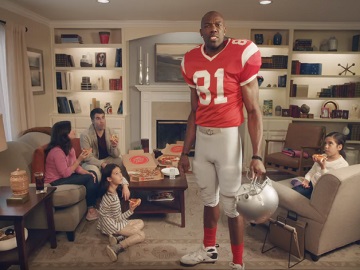 The 30-second spot opens with the voiceover introducing the Garcia family, who are eating the Pizza Hut they earned fast with Hut Rewards. “Since they’re too busy to boast, we got Terrell Owens, professional boaster.” – the voiceover says and Owens shows up in the Garcias’ living room ready to tout the Hut Rewards. “The Garcias here just used Hut Rewards to earn free pizza so fast, you just missed it. While you’re waiting around, playing dominoes…they were earning free pizza after free pizza with Pizza Hut.”, the former football wide receiver says, taking a jab at Domino’s Pizza.

The commercial ends with Owens urging viewers to “Sign up for Hut Rewards to get on the Garcias’ level.” since this is “the faster way to earn free pizza” and adding the chain’s tagline, “Because No One Out Pizzas The Hut”.

Previous: Sprint Super Bowl 2018 Robot Evelyn Commercial
Next: FirstBank Commercial: Saving Is In Style – Fashion Models Saying How They Save