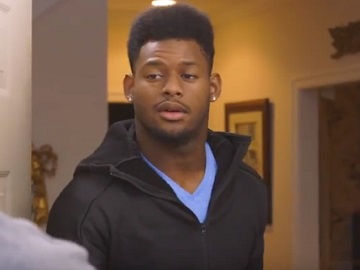 JuJu Smith Schuster shows off his doorbell dance moves in a new commercial for Pizza Hut, inviting viewers to show their doorbell dance, too, for a chance to win a trip to any regular season NFL game.

The fast-food restaurant chain has released a 30-second spot featuring the Pittsburgh Steelers wide receiver making his doorbell dance before a Pizza Hut delivery guy brings him his order. “We all need a doorbell dance,” he says, encouraging viewers to share their doorbell moves on Instagram using #PizzaHutHut & #Sweepstakes for a chance to win a trip to any regular season NFL game.

The Pizza Hut Doorbell Dance Video Sweepstakes takes place during the NFL Draft, starting April 26 through April 28. According to the official rules, the content of the Instagram posts will not be judged and will therefore not increase or decrease participants’ chances of winning the prize. Those who don’t have an Instagram account can also enter the Sweepstakes by sending a mail-in request.

Winner will receive a trip to a 2018 NFL football game of their choice on or before Sunday, December 30, 2018. The trip consists of roundtrip for the winner and one guest, coach class air transportation, three days and two nights and standard hotel accommodations, and $500 per diem which can be used towards meals and activities while on trip.

Pizza Hut became the official league sponsor of NFL earlier this year, replacing Papa John’s, which said it would end its sponsorship of the league. The League’s deal with Pizza Hu, signed for four years, will roll out with the upcoming NFL Draft this month. The agreement will offer the fast-food restaurant chain a range of exclusive marketing rights and designations that will connect the brand with the NFL and its teams, players, events, partners.