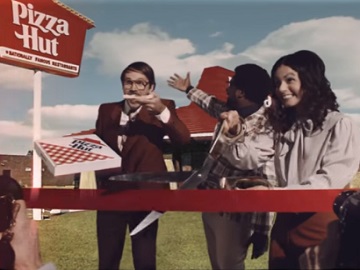 Pizza Hut celebrates its 60th anniversary with a new commercial, inviting viewers to “raise a slice to all the ways No One OutPizzas the Hut”.

“Here’s to Pizza Hut celebrating 60 years under one roof. Here’s to Original Pan, to Stuffed Crust and tomorrow’s “What will they think of next?”. Here’s to the Big New Yorker, Bigfoot Pizza, and inspiring us all to read with BOOK IT! Here’s to every night felling like Friday and the breakfast the next morning. Here’s to the first online pizza order. Here’s to the place we grew up and the pizza right-fielders still love today. So raise a slice to another 60 years and all ways No One OutPizzas the Hut,” the voiceover says on the 30-second spot, which illustrates Pizza Hut’s evolution over the decades, along with the important milestones mentioned.

Founded in 1958 in Wichita, Kan. by brothers Frank and Dan Carney, Pizza Hut now operates nearly 17,000 restaurants in more than 100 countries. In celebration of its 60th anniversary, the pizza restauran chain is introducing the new, limited-time Double Cheesy Crust Pan Pizza, which combines two of the brand’s most iconic menu items: Stuffed Crust and Original Pan. This pizza features a ring of cheese baked inside the golden edge of the crust, an additional layer of toasted Parmesan baked on the crust edge and a blend of Parmesan and oregano as topping.

Earlier this year, in January, Internet users were warned that the “Pizza Hut 2 FREE Large Pizzas” Giveway, offered to celebrate the 60th anniversary of Pizza Hut, was a scam. People were informed that the messages they received contain a link that looks similar to Pizza Hut’s website address or name and goes to a fake Pizza Hut website created by cybercriminals. In order to receive their so-called free pizzas, visitors were supposed to complete a survey and share the same scam with their friends via WhatsApp.

That was not the first Pizza Hut Giveaway scam. In October 2017, multiple versions of this same scam titled “Pizza Hut is giving 3 FREE Large Pizza Coupon on their 58th Anniversary” was circulated on Facebook.