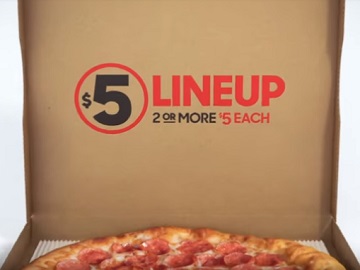 Pizza Hut showcases its $5 Lineup in a new commercial, highlighting that now you can get all your favourites for $5 each when you buy two or more.

“We’re more than just $5 medium 1-topping pizzas, stuffed garlic knots, breadsticks, bone-out, wings, pastas and new Cinnabon Mini Rolls, we’re the $5 Lineup with the best sides for your pizza,” the voiceover says on the 15-second spot, which features a group of friends gathered around the table filled with items from the $5 menu and a referee who’s also highlighting that each of those items costs $5.

The ad, which also specifies that delivery minimums and fees apply and that availability, prices, and participation may vary, ends with the voiceover saying the chain’s tagline, “No One OutPizzas The Hut,” and with an onscreen line informing that Pizza Hut is the Official Pizza of the NFL.

The pizza restaurant chain has also teamed up with Pepsi, another official sponsor of the NFL, to give customers a chance to win a trip to Super Bowl LIII. Those willing to participate at the Sweepstakes, which ends on the 31st of December 2018, must find entry codes on Pepsi four-pack carriers only at Pizza Hut and enter at pizzahut.com/pepsisweeps or share your homegate on Twitter (using the hashtag #HutxPepsiSweepstakes). The two brands have enlisted Todd Gurley to star in a commercial promoting the Sweepstakes.