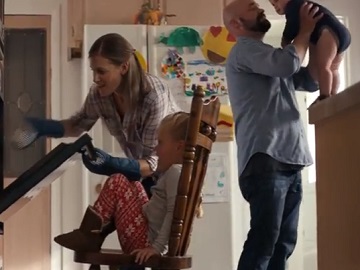 Pillsburry advertises its Cinnamon Rolls in a new ad, aimed at pulling at viewers’ hearstrings.

“In this home, we count our blessings, both where there’s a little and a lot. What matters most is they’re made at home,” a woman says in voiceover on the 15-second spot, titled “Blessings,” which features a mother taking out of the oven cinnamon rolls and giving one to each member of the family. Her little daughter, who seems to love this treat, is even happier when her dad gives her extra cream cheese icing to top off her warm cinnamon roll.

In another commercial promoting some of its products, including the Sugar Cookies, Flaky Layers Biscuits, the Cinnamon Rolls and the Original Crescents, the brand highlights that there are some things at home that can’t be bought and focuses on the fact that baking cinnamon rolls and crescents has become a tradition that is made at home for many families.