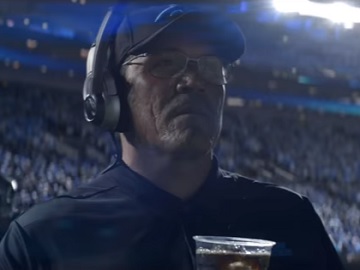 Titled “Ice the Kicker,” the ad features a football game on the Bank of America Stadium, where one of the teams has a chance to win it with a field goal. After calling a timeout and getting it, Carolina Panthers head coach Ron Rivera cracks open an ice cold Pepsi can and so does everyone else in the stadium. “There’s a timeout. They’re gonna ice the kicker,” the sportscaster says, adding that he’s never seen anything like that in his entire life, while fans are all craking open Pepsi cans simultaneously. As they all take a sip of the refreshing beverage and let out a sigh, the kicker of the opposing team, who had lined up for a last second field goal, misses. When the ball hitts the crossbar, the crowd starts to shout with excitement.

At the end of the spot, an onscreen line informs that Pepsi is the official soft drink of the National Football League.

Last month, the brand kicked off the 2018-2019 football season by getting fans closer to the game they love with a 360-degree program that brings football to their cities and into their homes like never before. On September 4, Pepsi’s national commercial “Theme Song”, featuring Terry Bradshaw, Dak Prescott, Antonio Brown, and Luke Kuechly, debuted. Pepsi Tailgate Tour continues, with further stops in Landover, MD, on October 21st, in Foxborough, MA, on November 4th, in Miami Gardens, FL, on December 2nd, and in Philadelphia, PA, on December 8th.