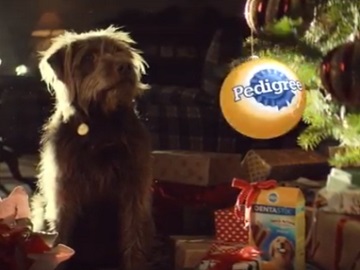 Pedigree celebrates the festive season with a Christmas commercial featuring a dog that discovers the true meaning of the holiday.

The film, titled “The Season of Good Dog” just like the brand’s global campaign, which was developed by Colenso BBDO New Zealand, tells the story of a family dog as seen through his own eyes. The pet recalls the moment he joined the family, on “a day like any other day” (but it was actually Christmas), and how humans came from faraway places to see him, turning this holiday into “the season of Good Dog”. “They would honor me with a tree for my love of sticks, balls for my love of fetch, and paper for my love of wrapping. Year after year after year, the world would celebrate the season of Good Dog. And it was good. Until one year. Everything changed. As always, the world was getting ready. But not as always,” the Good Dog says, talking then about the moment he first met Awww. The encounter took place in front of a pet adoption center, while Awww was in the window, but the Good Dog didn’t know that. He just knows that the next morning, after a night he couldn’t sleep, thinking about the possibility of the season of Good Dog becoming the season of Awww, his cute four-legged fellow joined their family, bringing joy to the entire family, which was gathered around the Christmas tree. “That’s when I saw the true meaning of the holiday. This wasn’t about Good Dog. How could it be? This was about good dogs,” the Good Dog says as he’s watching through the window together with Awww.

The film also includes a comedic scene, which also features a Pedigree package. The Good Dog says the morning of the holiday he couldn’t eat, but he did – at this point, viewers get to see that he did eat because he was given Pedigree.

The brand also created a series of Season of Good Dog-themed carols to run as ads on Spotify, as part of a partnership with the streaming platform. Users are then directed to the full playlist for owners and their furry friends to enjoy together.