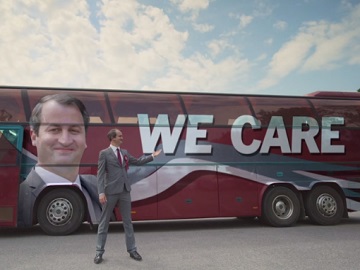 “Why can’t VAR sort out all the nonsense off the pitch as well as on it?!” this is the question raised in the latest Paddy Power advert, titled “Enough of the nonsense!”.

The 30-second spot gives some examples of nonsense off the pitch, like “who’s first at the bar”, a situation analyzed and solved by a team of VARs (video assistant referees), who are able to clear up everything, from a couple of swingers to a polician during campaign, from the meat used in a burger to an ad filmed by a male model and to the one person that smells terrible in a full elevator, making those around to hold their breath.

The Dublin-based gambling company uses Speed-Trap’s Prophet system, which analyses events in real time, rather than relying on web server logs. “The system allows us to observe, analyse and replay the user journey through our website, and that information enables us to appreciate exactly what visitors wish to do.” Peter O’Donovan, business development manager at Paddy Power, said in 2005, when the data collection technology was installed on the betting site.

At the end of last month, Paddy Power announced it was merging its US operation Betfair US with FanDuel, one of the two largest fantasy sports companies in the United States.