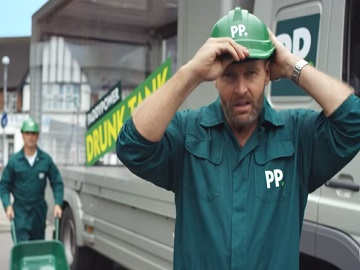 Paddy Power is introducing, in one of its latest adverts, the “Drunk Tank”, which is a mobile unit meant to bring relief to the residents of Ascot during the Royal Ascot, Britain’s most valuable race meeting, attracting many of the world’s finest racehorses to compete for more than £7.3m in prize money.

Unveiled “following a spate of booze-fuelled brawls at race meetings,” the Drunk Tank is “here to clean up racing,” according to the 60-second spot, which features “drunken tufts and city suits on the lash”, responsible for ruining the event, of whom the locals have had enough. A “banjaxed” pair, a man “literally drunk as a lord,” a “totally lacquered” woman, an accentric lady, also drunk, transported with a barrow, and many others end up in the Drunk Tank, which has a capacity of 38 cubic meters and can handle “over 50 rat-ass racegoers at any one time”.

The spot, part of the “Enough of the Nonsense” campaign, sees some of the city residents giving a round of applause to Paddy Power’s Drunk Tank as it leaves taking away dozens of drunk people.

Founded in 1711 by Queen Anne and located in Ascot, Berkshire, England, Ascot Racecourse is used for thoroughbred horse racing. It is one of the leading racecourses in the UK, hosting 13 of Britain’s 36 annual Group 1 horse races. Every year, Royal Ascot is attended by Elizabeth II and other members of the British Royal Family, such as The Prince of Wales, the Duke and Duchess of Cambridge, the Earl and Countess of Wessex. During Royal Ascot week, over 300,000 people make the annual visit to Berkshire, which makes this Europe’s best-attended race meeting. There are eighteen group races on offer, with at least one Group One event on each of the five days. The Gold Cup is on Ladies’ Day on the Thursday.