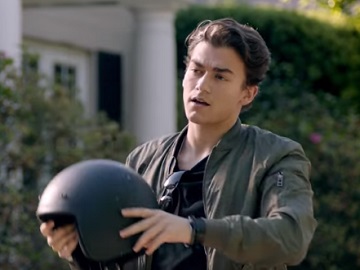 Optimum helps its customers who are moving within the tri-state area through a series of services that help them stay connected throughout their move. To highlight this, a new funny ad has been launched.

The spot, titled “Boyfriend”, features a teenage girl getting in the back of her family’s car and telling her parents that “it’s not fair”, referring to their move. “Honey, a little space could be good for you both,” her father tells while driving away and leaving her boyfriend, who was standing near his bike, in front of their old house, behind. As the ad goes on and the girl and her parents are seen taking their belongings into their new house, the voiceover advises viewers to move with Optimum and stay connected during their move with over 1.5 million Optimum Wi-Fi hotspots. When their new neighbor, a hot guy riding a motorcycle, shows up and takes his helmet off, the girl’s dad can’t help but say “You have got to be kidding me”.

The commercial ends with the voiceover adding “Move with us to get our most exclusive movers offer and we’ll upgrade you with our latest techology.

Optimum allows its customers to forward their Optimum Voice calls to their cell phone so they don’t miss anything important and keep their Optimum ID and password. Moreover, they can take their connections to the max with speeds up to 400 Mbps. The company even provides a Moving Checklist, featuring things to be done before, during and after your move.