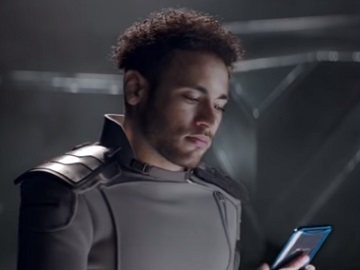 Neymar Jr. gets transferred to the Martian League in the latest commercial for OPPO Find X, the brand’s “futuristic flagship phone”, which is also “the world’s first panoramic designed phone”.

The famous football star, who became the ambassador of OPPO Malaysia, is seen at a party where a man announces his his transfer to the Martian League, informing the guests that he will leave for Mars tonight. At this point, Neymar notices a gorgeous young woman, wearing a flattering white dress and a necklace with a green gemstone in it, and starts following her after she drops the necklace on the floor.

Picking up the necklace, the message “Find X” appears on the emerald. He is then seen travelling to Mars, where someone informs him that there he will find more than he expected. “I can give you immortality, but there will be a price to pay,” the man tells him, asking if he is willing to pay the price. The young woman, who shows up at a window, makes him a sign to say ‘no’ and then disappears, making Neymar Jr. rushing after her. Eventually, he enters a room where he finds what he was looking for and a message from the mysterious woman.

OPPO Find X, introduced as “the world’s first panoramic designed phone,” combines two seamless pieces of glass with the front screen featuring a gorgeous panoramic view. It has two innovative gradient colors – Bordeaux Red and Glacier Blue, which gleam like a precious gemstone, state of the art stealth 3D cameras, designed to “redefine smartphone photography,” with a number of innovative technologies, like 3D Face Recognition system, front camera, rear dual camera and many intricate sensors. The AI-enhanced 3D Camera, equipped with a 3D lighting technique for artistic portraits, “intelligently analyzes features such as face, nose, and eyes, etc. to naturally personalize your selfie,” according to the brand, which also informs that the OPPO Find X is “the first Android smartphone to feature 3D Structured Light Technology”.

Earlier this year, in April, the Brazilian soccer played kicked off the Chinese consumer-electronics maker TCL’s 2018 sports campaign as global brand ambassador. He is also a brand ambassador for PokerStars, ARCO Developments, and starred in commercials for multiple brands, including Beats by Dre, Gilette, Red Bull, and more.

As an ambassador of Handicap International, Neymar Jr. is also lending his huge fame to a good cause: empowering the most vulnerable people in the world, people with disabilities living in poor countries, victims of conflicts and natural disasters.