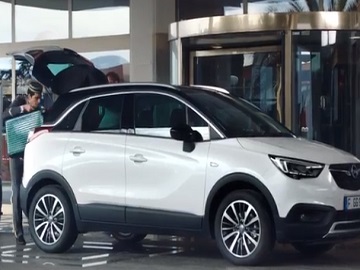 Opel has released a series of new ads showcasing the Opel Crossland X and some of its most important features.

One of them, focused on the boot capacity, stars actress Bettina Zimmermann taking advantage of the Croslland X’s impressive amount of space by having an impressive amount of luggage placed inside. When world class football coach Jürgen Klopp, whom she meets in front of the hotel she has been staying in, expresses his skepticism regarding her suitcases, saying they won’t fit in, she answers, showing him her small purse, that the respective item goes up front with her. As the hotel porter starts placing the luggage in the trunk, it turns out there is, in fact, enough space for all of them. The ad also highlights that the Opel Crossland X comes not only with 1.255l boot capacity, but also with innovative technology features like the 180° Panoramic Rear View Camera, which helps you with great visibility even when reversing.

Finally, the Opel SUV models – Grandland X, Crossland X and Mokka X – are shown, while the voiceover says the tagline “German SUV feeling for all”.

At the end of last month, on April 26, the German automaker announced that the Opel Grandland X is bringing a new advanced diesel engine to the brand’s powertrain portfolio: a 1.5-litre, four-cylinder, turbocharged diesel engine, which is “more powerful and more economical than the engine it replaces.” The new 96 kW/130 hp diesel, equipped with fuel-saving Start/Stop, is making its debut in the Grandland X with a six-speed manual transmission. According to the car manufacturer, it is also available with an advanced new eight-speed automatic transmission that “not only offers seamless shifting, but thanks to its low friction design also further reduces fuel consumption and emissions”.

Jürgen Klopp, who has been an Opel brand ambassador for years, also starred in a campaign dedicated to the Opel Mokka X, described as a “Dynamic SUV with stand-out innovations such as LED Headlights, OnStar with 4G Wi-Fi, Apple CarPlay and Android Auto”.