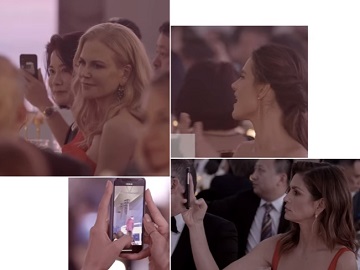 Luxury Swiss brand Omega is launching a new campaign to promote its Constellation My Choice Watch collection and brought together, for the purpose, Cindy Crawford, Nicole Kidman, Liu Shishi and Alessandra Ambrosio.

The four ladies appear in a teaser of the campaign, which was posted by Crawford on Instagram along with the message “Charlie’s Angels in Shanghai with @Omega #OmegaConstellation”.

Crawford, a longtime ambassador for Omega, has also starred in an Omega commercial, launched on this year’s Mother’s Day, together with her daughter, Kaia Gerber. The mother-daughter duo took center stage in Peter Lindbergh’s Malibu photoshoot, titled “Two Generations. One Choice”. Crawford’s son, Presley Gerber, has also starred in an Omega ad, trying on different NATO straps to give his OMEGA Railmaster a range of colourful looks.

Alessandra Ambrosio is an Omega ambassador, as well, showcasing, in 2017, the Seamaster Aqua Terra collection, described as the perfect fit for “women with an intrepid spirit and a love of elegance”.

Earlier this year, at the end of August, Nicole Kidman joined Omega in St. Petersburg for a magical night at the Marble Palace to launch OMEGA’s spectacular exhibition of feminine timepieces “Her Time,” which celebrated over 100 years of women’s watchmaking and was open at the Marble Palace until September 12, 2018.