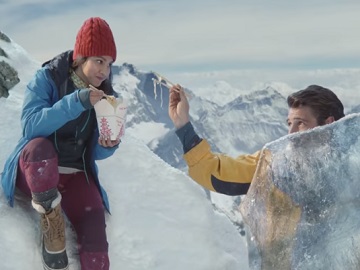 Old Spice’s “She Nose Best” campaign continues with a new spot, which tells a love story about a woman, a man, and a total grooming regimen from Old Spice.

The ad features a woman talking about her relationship with the man she found frozen in a block of ice on the top of a mountain. “I was 200 feet from the summit when I first saw him. He was a mess, but I knew I could save him with a total body grooming regimen from Old Spice,” the woman says, while on screen she is seen making the guy look much better with the brand’s grooming products, eating Chinese takeout in his company, and playing with snowballs, until she decides that “he was too attached to that mountain”. Back to the present day, in the room where she’s holding the speech, when she closes the book she wrote based on this experience, titled “Too Attached to that Mountain,” the young man frozen in a block of ice shows up all dressed up, holding a heart-shaped red balloon and a bunch of red roses. “Dylan, is that you?” she asks him, before the voiceover ends the commercial by encouraging viewers to use Old Spice.