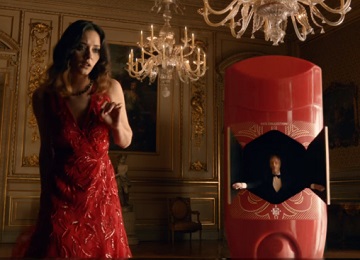 Old Spice promotes, in a new ad part of the “We Make Scents For Men” campaign, the Old Spice Endless Ambassador.

Created by agency Wieden + Kennedy, the spot features a young woman in a red dress called Princess Beautiful and her lover, called Pizza Boy, running through the halls of a palace and searching for each other. While she shouts “Old”, the handsome rogue shouts “Spice” until they find themselves seated at a table where a clock sits between them and they try to say the name of Old Spice’s Endless Ambassador fragrance simultaneously, but with no success.

Part of the brand’s Red Collection, the Endless Ambassador deodorant for men, with scents of musky woods and spices, is free of aluminium and parabens, features fade-resistant scent technology and provides 24-hour odor protection, “in case you need to climb a mountain, fight off a bear, and ride an elevator all in the same day”. The Ambassador Red Collection also includes Invisible Antiperspirant Deodorant and Body Wash.

The “We Make Scents For Men” ad campaign premiered in January, during the 60th Annual GRAMMY Awards, with a commercial dubbed “Red Sweater” which was completely in French and parodied fine fragrance commercials.