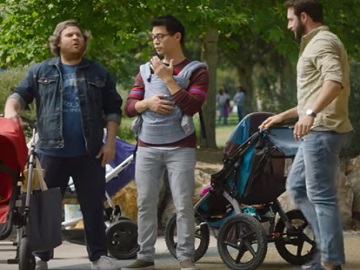 Old Navy has released a hilarious new ad to promote the built-in though jeans for men, now on sale from $19.

The spot features three dads at a playground with their children, whose conversation is interrupted by a little boy screaming for help. Hearing him, one of the men, who’s wearing Old Navy built-in though jeans, starts sprinting toward the kid, avoiding obstacles along the way and making it seem very easy. In the meantime, his fellows talk about his jeans, saying they “have built-in though and are basically indestructible.” Fortunately, the “hero” gets to the boy just in time and saves the day. Eventually, the little one can’t help but ask “Why didn’t my daddy save me?”. Yes, it turns out his father was one of the guys that remained still and now wants the whole situation to remain a secret to his wife.

The commercial ends with the highlight that men’s jeans are on sale from just $19.

The retailer has been also promoting the new denim collection for the entire family, which includes Rockstar 24/7 for women, Built-in Flex for men, Ballerina for girls and Karate for boys. Other spots featured dresses for women and girls, like the new Tiered Cami Dress, the Power Jean, aka “the perfect straight”, the Relaxed Slim for men, as well as the full range of #sizeYES denim, which includes sizes from 00 to 30 and 12 lenghts.