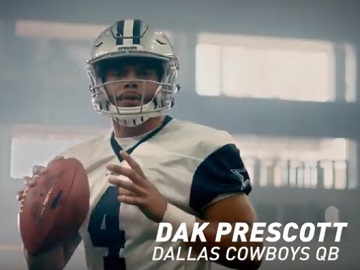 Oikos Triple Zero celebrates its status as the Official Yogurt of the NFL in a series of new ads.

“Oikos, the official yogurt of fueling your hustle,” the voiceover says at the end of the commercial.

Oikos became the Official Yogurt of the NFL in 2015, the year it introduced Oikos Triple Zero, a product aimed at appealing to both men and women. Available in six flavors – Vanilla, Coconut Crème, Strawberry, Banana Crème, Mixed Berry and Peach – the yogurt began to hit shelves December 20, 2015. Prescott has starred since 2015 in several other spots, endorsing the zero added sugar yogurt.