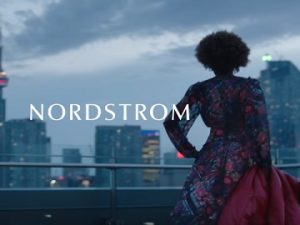 Nordstrom has launched its first national Canadian campaign, titled “True Nord”, with a spot that celebrates the locals’ individuality and diversity.

Filmed in Toronto by native-Canadian photographer Justin Tyler Close, the ad features 13 Canadians influencers of different ages, races, sexes and sizes, including Biko Beauttah, a transgender United Nations Goodwill Ambassador, Mel Kobayashi, the founder of the style blog Bag and a Beret, Yolanda May Largie, co-founder of The Canadian Curvies, a group celebrating body positivity, and Harjas Singh, a fashion stylist and consultant. While the narrator says “Your Canada. Your True North. Strong and free. From far and wide, with glowing hearts, we see you rise glorious and free. Oh, Canada, you stand for everybody, we’re proud to call your Canada our home”, on screen a lesbian couple are seen on their wedding day, kissing in front of guests, a lady on the bus – Mel Kobayashi – is seen giving her seat to a muslim father and his little daughter, models rocking Nordstrom outfits are seen walking down a sidewalk.

Earlier this month, Nordstrom exclusively launched Good American’s activewear collection, ranging from sizes XS to 4XL, and celebrated the event with a rooftop workout with Khloe Kardashian at its Seattle headquarters.

Nordstrom opened its first full-line Nordstrom store in Calgary in late 2014 and, within the following three years, opened five more stores across Canada. This year, the department store chain rolled out three locations of its off-price chain, Nordstrom Rack, and is set to roll out three more this fall, so that by the end of 2018, have in total 12 Canadian stores.