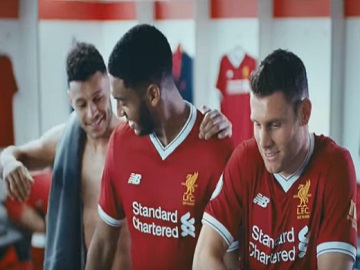 The spot features the three football stars joking around in the shower room as they put the NIVEA MEN Body Shaving range to the test. Alex Oxlade-Chamberlain went shirtless, showing off his hunky frame and rippling abs as he uses the NIVEA MEN Body Shaving Anti Irritation Body Stick under the water. The voiceover highlights that the product offers control, precision and great defense against irritation.

In a behind-the-scenes video filmed on the occasion of the brand’s new advert, Mohamed Salah has been revealed as the hairiest player at Liverpool and Roberto Firmino has been labeled as “the best-groomed player in the team” by his teammates.