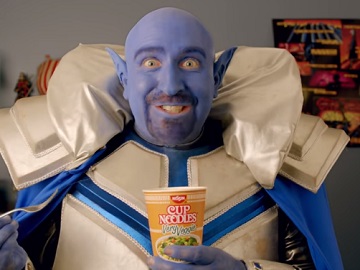 One of the spots features a cosplayer with his face painted in blue, wearing a white and blue costume and sharp ears, saying, while eating a Nissin Cup Noodle, “Look, honey, I’m eating my veggies”.

At the end of the spot, the voiceover urges viewers to try the new vegetarian Soy Sauce flavor, with a full serving of vegetables, that includes a mix of edamame, carrots, bok choy and green beans.

Another spot features a young woman eating Cup Noodles Very Veggie on a bench in the park and displaying a large smile to the camera, which reveals teeth with small pieces of vegetables on them, and another 15-second spot presents the confession of a Nissin Cup Noodles lover. “When Cup Noodles steams up my glasses, I pretend I’m stranded in a snowstorm”. – a female voiceover is heard saying.

“We’re continuously listening to our growing consumer base and their desire for new flavors, and Cup Noodles Very Veggie Soy Sauce is the newest innovation for an enjoyable, quick option for consumers’ on-the-go,” said Leslie Mohr, Vice President of Marketing of Nissin Foods USA in a press statement.