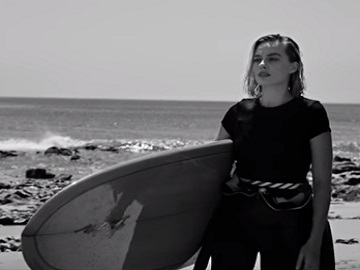 Margot Robbie and Nissan call for change towards a better world in a short film aimed at inspiring people to decide for themselves if they want a cleaner, quieter and more sustainable way of driving and living.

The Academy Award nominated actress, who is Nissan’s ambassador for Electric Vehicles and Intelligent Mobility, pulled on her wet suit, took her surfboard and went surfing by her Nissan Leaf for the 2-minute video, which delivers the following message: “Some people say we’re crazy… that we’re seeing problems where they don’t exist. I say we’ve got the power to change things. You see, we’re all on a journey. And along the way, there are twists and turns. The road we thought we were on changes. Eventually, we realise where we’re heading. But if we don’t like what the destination looks like, we can change that too. We can course-correct, innovate, evolve, setting our sights on a new destination. But in the end, we’re all headed to the same place. A better world for ourselves and everyone who comes after us. Because when he harness our energy, suddenly it’s closer than you think. And the power we need to get there, it doesn’t come from the powerful, it comes from you, me, each and everyone of us making the decision to transform our life and our future. Soon it’s going to be the new normal. But today we’re the first. We’re transforming the way we drive to transform the way we live”.

In October 2017, Nissan announced that it will enter the fast-growing Formula E series in the 2018/19 season. The all-electric series gives the automaker a highly visible global platform from which to spread the message of Nissan Intelligent Mobility – the three-pillar strategy to redefine how its vehicles are driven, powered and integrated into society.

Earlier this year, in February, the Australian actress and producer announced, during her first ever Facebook livestream, that Nissan will premiere its new Formula E electric concept livery at the Geneva Motor Show on March 6. She is also a supporter of three new sustainability pilot projects “that aim to harness the skills, ingenuity and experience of Nissan’s global workforce to target the vital areas of energy access and disaster relief”.