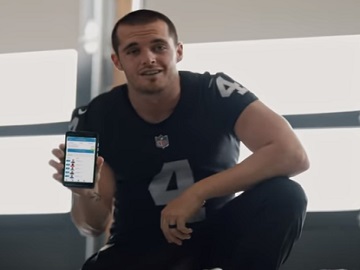 The spot features the Oakland Raiders quarterback and a man named Trevor sitting in on a coaching session. Asked by the coach to draw up a complicated play on the whiteboard, Trevor takes the pen and, after looking back at Carr, passes out. Carr says playing in the NFL is hard, but playing nfl.com Fantasy Football is easy, mentioning that now you can optimize your starting lineup with just one click. As he says that, he uses one of his mate’s finger to optimize the lineup in the mobile app.