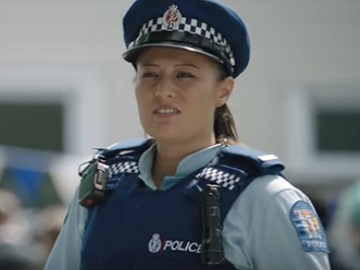 The 3-minute film opens with a police officer concluding her press statement in front of a crowd by saying “And that’s why New Zealand Police are looking for more recruits”. “Does anyone have any questions?” she asks, which leads to a series of questions raised by a variety of characters, such as a tractor driver, who asks what kind of people the New Zealand Police are after, a young woman riding a small vehicle, who asks if, to become a cop, you need a full driver’s license, a guy in a tattoo shop getting a tattoo on his back, who asks if he can have tattoos, a guy in low water in the sea asking if you have to know how to swim, a visually-impaired woman who asks if you need a good eyesight, an actor who asks if he can be a real cop if he played a cop in the movies, a couple of tourists from Austria who ask if anyone can join the New Zealand Police, a grandmother who asks if her 17-year-old granddaughter can join, a woman who can barely breathe during her run who asks how fit you have to be to apply, a guy who, praised by other for his negotiations skills, asks if he can go straight into the police negotiation team, and others.

Through the answers given to these persons, the ad informs that New Zealand Police need a diverse mix of recruits that reflect Aotearoa, that a full driver’s license is required, that size is not a barrier, that you can have tattoos, but those on hands and face will have to be assessed, that you have to feel safe and confident around water (with the mention that the training you get at Police College will give you the skills you need), that there is a minimum visual standard you need to meet (aka to see well the person in front of you and not trying to shake hands with the plant near them), that it doesn’t matter your current job, as long as you qualify like everyone else, that anyone can join the New Zealand Police as long as they are a New Zealand permanent resident or a citizen of New Zealand or Australia, and they are at least 18 when they start Police College, that you have to be reasonably fit to get through and that you get a lot of support along the way, that you can join the negotiation team as a career option after you serve your first two years.

Comedic scenes, including a chihuahua and a police dog, “paranormal” cops and the Aukland Police Pipe Band, are also featured.

The end of the film sees a chief of police telling journalists the New Zealand Police need more police officers than ever. “If we’ve answered your questions, apply now,” a police officer says, advising viewers to ask other questions, if they have, at newcops.co.nz. With a starting salary of $52,102 plus super in your first year out of college, when you’ll start as a probationary Constable, you will have the chance, after two years in this position, to choose to work in a specialist area, such as Family Violence Team, Youth Aid, Neighbourhood Policing Team, Iwi Liaison Officer, Financial Crime Unit, Road Policing, Child Protection Team, and more.