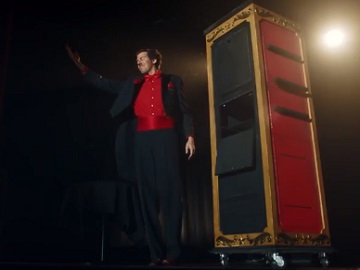 New York Lottery has released a new commercial, urging people to play scratch-off games from the New York Lottery for a chance to win anywhere and anytime, even at a magic show.

Titled “Magician”, the 30-second spot features a magician onstage showing his audience that the box he’s using for his disappearance trick is completely empty. Just when he raises his hand ready to conclude the show, he (and the audience, obviously) hear the voice of the woman who “disappeared” shouting “Jackpot! I won!”. The magician shushes her and, in an attempt to make viewers believe she didn’t actually say a word, tells them that “sometimes, we hear voices from the great beyond… if it happens”.

The commercial ends with the tagline “Win anywhere. Win anytime.” flashing across the screen and the voiceover encouraging you to play scratch-off games from the New York Lottery, mentioning that you could be one of over 4 million weekly winners.

Previous: Peloton Bike Commercial – Better Is In Us
Next: Sainsbury’s Valentine’s Day Advert – Dog Burying Owner’s Things in a Hole