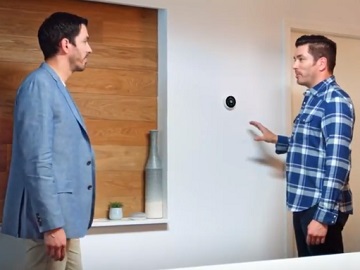 The Scott Brothers star in a Best Buy commercial running in Canada, promoting Google Home Mini and the Nest Thermostat.

The spot features the two siblings as new users of the Nest Learning Thermostat, asking Google to set different temperatures. Initially, one of them wants the temperature to be set to 16 degrees, but his twin, arguing that “we can’t all wear flannel 365 days a year,” asks Google to set the temperature to 22 degrees. At this point, the other brother takes off his flannel shirt and, revealing he had a short-sleeve shirt underneath, says he’s good.

The ad ends with the voiceover urging you to “Get a free Google Home Mini when you buy any Nest Learning Thermostat, available at Best Buy”.

Jonathan Scott and his twin brother, Drew, are best known as the hosts of the TV series Property Brothers, as well as the program’s spin-offs Buying and Selling, Brother Vs. Brother, and Property Brothers: At Home, which are broadcast in the U.S. on HGTV. They have launched the lifestyle brand Scott Living and its extension, Dream Homes.