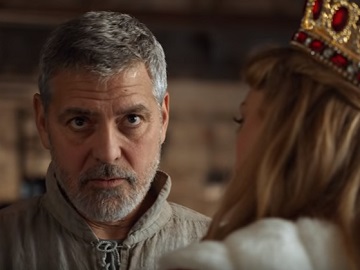 George Clooney is back on the small screen in a series of new ads for Nespresso. In one of them, titled “Really, George?”, he shares the scene with key people in the Nespresso journey, from an agronomist and a coffee farmer, to a country director at TechnoServe to name a few.

As he is on set, during a break, he grabs a cup of coffee (Nespresso, obviously) and while he’s enjoying it, various people are shown in different stages of the production process. At some point, when he turns around, the cup in his hand, actress Natalie Dormer shows up and the collision between the two of them results in a drop of coffee being spilled on Natalie’s dress (she plays a queen of the Middle Ages in a different spot, titled The Quest). “Really, George?” she asks him upset and the same question is asked by all the people seen throughout the ad. “You know everything that goes into a cup of Nespresso,” Natalie adds, leaving her co-star a little bit ashamed by his clumsiness.

“My work with Nespresso goes beyond the new campaign,” Clooney said. “We share a commitment to sustainability and supporting the livelihoods of farmers and their families, as, without them, we wouldn’t have this great coffee. Starring alongside them in the campaign is a real honor,” he added in a press statement.

The brand, owned by the Nestlé Group of companies, is known for making its coffee exclusively within the group, from growing the coffee beans to perfecting the coffee blend, from devising a marketing strategy to the manufacture and distribution of the aluminum capsules.

Clooney has been a Nespresso ambassador since 2006. Three years ago, he headed out with Nespresso to Costa Rica to see the company’s coffee farmers for himself.