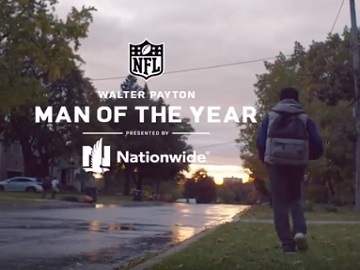 Nationwide celebrates, in a new ad, its status of proud sponsor of the NFL’s most prestigious award, The Walter Payton NFL Man of the Year, which recognizes a player for his excellence both on the field and in his community.

The spot, titled “Goals”, features a young boy holding a speech about his dream of becoming a first pick in the NFL Draft and his ambitions, which include being the best receiver in the game, doing more for his community than anyone has ever done, visiting six children’s hospitals in one week, coming back in his hometown to fix the field he’s now playing as a child, and more. Determined to do “better than great” when he goes to the NFL, he ends his speech by saying that, when he grows up, he wants to be “Man of the Year”. Throughout the film, he is seen not only playing football with his peers, but also walking into the forest with his best friend and talking to him about his goals, helping his mother in the kitchen, playing baseball with his father in the backyard, and practicing his speech at home, when he should play instruments.

“Nationwide, born in the commitment to community, is proud to sponsor The Walter Payton NFL Man of the Year Award,” the voiceover says at the end of the commercial.

Nationwide launched its Official Sponsorship with the National Football League in August 2014. The partnership includes, besides sponsoring the prestigious Walter Payton NFL Man of the Year Award, relationships with current and former players, teams, and media activity.

The Walter Payton NFL Man of the Year, which honors a current player’s contributions on and off the field, went to J.J. Watt in 2017 and in 2016 to New York Giants quarterback Eli Manning and Arizona Cardinals wide receiver Larry Fitzgerald.

Established in 1970, the award was renamed in 1999 after the late Hall of Fame Chicago Bears running back, Walter Payton. Each team nominates one player who has had a significant positive impact on his community. In the name of the 2017 winner $500,000 have been donated by the NFL Foundation, Nationwide and United Way Worldwide – half to the winner’s charity of choice and half to expand Character Playbook across the country.