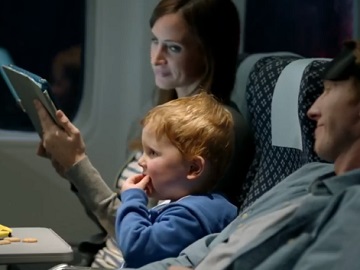 Dare Foods promotes the new MY FIRST BEAR PAWS in a new commercial, that uses a lighthearted approach to parenting, reminding people that it has its share of firsts – good and bad – and highlighting that MY FIRST BEAR PAWS are definitely a good first.

The 15-second spot features a young couple travelling by plane for the first time with their toddler, who can’t sit still for one minute, pushing his parents’ patience to the limit. While an impulssive reaction is labeled as “bad firsts”, the recourse to MY FIRST BEAR PAWS as a snack for the little one, to keep him on his seat, is presented as “better firsts”.

The ad informs that the crunchy Bear Paws cookies are made with only 4 grams of sugar and that they come in two flavors – vanilla and oatmeal.