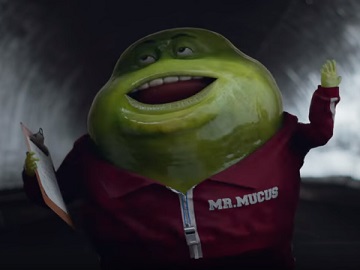 Mucinex has released a new ad part of the #SuperSickMonday integrated marketing campaign, developed by McCann.

Titled “Postgame”, the 30-second spot features Mr. Mucus dressed as a coach, addressing the nation while walking through a dark tunnel, at night, after the Big Game. “It’s post game in America, America. Game’s over, party’s over. And right about now, millions of you are thinking about calling in sick to work tomorrow. One small problem with that: you won’t be really sick at all. You’ll be faking it.” – he says while on screen several persons are seen after the Super Bowl party, contemplating the idea of calling in sick to work the Monday after. As he walks out of the tunnel, he also adds “Shame on you, America!” and at this point a huge pack of Mucinex Fast Max, which fights cold, flu and sore throat, falls on him.

The spot ends with the onscreen lines “Enjoy your “sick day”, America” and “When you’re really sick, take Mucinex” while in the background crickets are heard.

The brand’s new tongue-in-cheek campaign, developed in reaction to a survey commissioned by Mucinex and The Workforce Institute at Kronos Incorporated about post Super Bowl sickness, debuted earlier this week, on January 29, with a teaser that featured a guy actually calling in sick to work and Mr. Mucinex showing up and blowing the whistle on him.