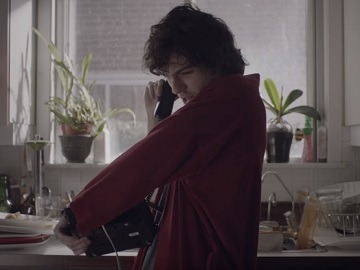 Mucinex has released a teaser for its #SuperSickMonday integrated marketing campaign, developed by McCann, that illustrates the letdown people experience after Super Bowl.

The 15-second tongue-in-cheek spot, created inreaction to a recent survey commissioned by Mucinex and The Workforce Institute at Kronos Incorporated about post Super Bowl sickness, features a guy calling out of work on the Monday after the Big Game. Wearing a robe, the man, surrounded by a bunch of dirty dishes in the kitchen, informs his boss he’s got “this thing” and he’s not going to make it to work. In his attempt to be convincing, he coughs from time to time, but Mr. Mucinex shows up and blows the whistle on him. “You are not really sick. You were just up late watching the game. You faker!” – Mucinex anti-hero says as loud as possible, while the guy is still on the phone.

#SuperSickMonday is coming.” – flashes across the screen at the end of the spot. Embarrassed, the guy tries to excuse himself, telling his boss that the person talking near him is his grandma.

“We’ve had fun with this campaign, giving a lot of the power to consumers and influential personalities in sports and comedy to talk about what #SuperSickMonday means to them,” Brian Dolan, Equity Lead for U.S. Health at RB said.

“The timing of our ad right after the game syncs up with the immediate nationwide feeling of post-game blues, latching on to that moment when you begin to rationalize calling out sick. We think this approach will help us increase brand awareness at a time of year when lots of brands are advertising in a more traditional way. By giving people a laugh now, we hope they will turn to Mucinex when they’re actually sick.”, Dolan added.