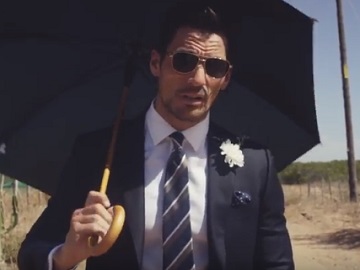 M&S has unveiled its Men’s Formalwear Summer 2018 campaign, titled “Going to the chapel?”.

M&S also offers a range of wedding and occasion suits, including prom suits, formal shirts, including the best-selling luxury white shirt, which is now available in 6 sleeve lengths (from 33″ to 38″), formal shoes, ties and formal accessories. The FA suit, a crisp three-piece made from 100% merino wool and featuring football-inspired jacquard linings, designed for the England Football Team to wear at the World Cup 2018, is also available for purchase.

Gandy, who has been modelling for the retailer since 2014, was named M&S’ first ever Ambassador of Tailoring in October 2017. Considered Britain’s most sartorially successful male supermodel, he has been working closely with the creative teams on the online tailoring hub that gives customers tips on finding the perfect fit and how they can style and wear suits for different occasions from the various different ranges.