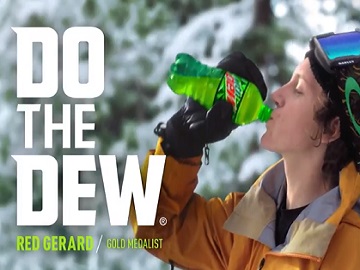 Red Gerard stomps his most epic trick yet in a Mountain Dew commercial. The Olympic gold medalist, who joined the Mountain Dew snowboarding team in 2016, snatches over a moving train, on top of which four youngsters enjoy Mountain Dew beverages. As he does the amazing stunt, the witnesses stop for a second, just when they were toasting, to watch Gerard, who continues to snowboard down the mountain.

At the end of the spot, the tagline “Do the Dew” flashes across the screen and the The professional athlete, who was described as “one of the best up-and-coming snowboarders of his generation” by Ryan Collis, Senior Director of Marketing, Mountain Dew, when he was welcomed to the Mountain Dew team, is also seen drinking Mountain Dew.

Gerard, who started snowboarding when he was around 2 years old and got more involved when his family moved from Cleveland to Colorado when he was 7, represented the US in the 2018 PyeongChang Olympics and won the gold in slopestyle, marking the U.S.’s first gold medal at PyeongChang.