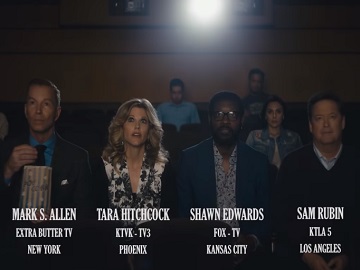 The countdown to Super Bowl LII, taking place on February 4th, at U.S. Bank Stadium in Minnesota, has started, so major brands started to tease their special commercials for the occasion.

Pepsi, whose Halftime Show will be hosted by Grammy winner Justin Timberlake, was the first one to release a teaser. The soft drink brand revealed that its Super Bowl ad is a new take on its 1992 Super Bowl ad, starring Cindy Crawford. In this year’s commercial, though, the supermodel won’t be alone, but with her son, Presley Gerber.

The Mars-owned chocolate brand M&M’S has released an ad for its Super Bowl LII ad, featuring the reaction of some of the critics who vote for the Critics’ Choice Awards. Thus, the 30-second commercial stars Mark S. Allen from Extra Butter TV New York, Tara Hitchcock from KTVK – TV3, Phoenix, Shawn Edwards from Fox – TV Kansas City, and Sam Rubin from KTLA 5 Los Angeles sharing their thoughts about the M&M’S Super Bowl 2018 ad. “What we just watched was outrageous, singular, cathartic, and breathtaking.” – Rubin says, adding that, “by the time you realize what’s taking place, you’re all at once in love, mesmerized, heartbroken, inspired and complete.”. At this point, Edwards tells him, in a serious voice, “Sam, dude, that was a M&M’S commercial.” “That was a what?” – Ruben asks eating some M&M’S candies.

Created by BBDO New York, this will be the first M&M’S Super Bowl ad in three years and will air during the first quarter of Super Bowl LII, on NBC.