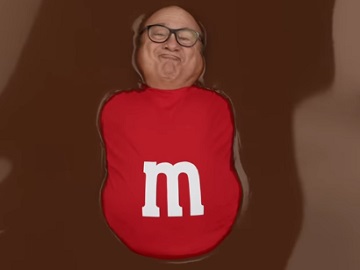 After the commercial released a week ago, featuring the “Critics Review” for its Super Bowl LII commercial, M&M’s has just released a teaser, starring Danny DeVito.

The spot, available as 5- and 15-second versions, features the Golden Globe Award-winning actor portraying a red M&M’s immersed in what looks like a giant pool of chocolate.

Allison Miazga-Bedrick, Brand Director, M&M’S, said in a statement that, “Much like M&M’S, Danny DeVito knows how to entertain”, and that he would bring “the perfect amount of humor needed for this year’s Super Bowl spot”. Miazga-Bedrick also mentioned that they know the brand’s fans will be “delighted” to see how DeVito interacts with some of the spokescandies.

Created by BBDO New York, the teaser video will air once on TV during the Super Bowl LII pre-game show on NBC. The full commercial, running 30-second long, which is the brand’s first Super Bowl ad in three years, will air during the first quarter of the Big Game, taking place on Sunday, February 4, and will also feature a special guest appearance by Trodick Hall (YouTube personality, singer, dancer, drag queen, choreographer, and actor).

Of his partnership with the Mars-owned iconic chocolate brand for its Super Bowl ad, the comedic A-lister said he “quickly jumped on the opportunity” when he was approached, asking “Who can resist seeing me in a giant pool of chocolate?!”.