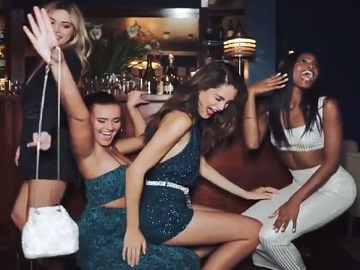 Missguided showcases its new season party collection in a spot that encourages women to give the disco ball some serious competition.

The 60-second advert, titled “Partywear Worth The Hangover,” features several models getting ready to go to a party. From the comfort of an apartment, where they’re drinking champagne wearing nothing but underwear, they head out and take a cab to the destination: a club. There, they have shots of tequila, take selfies, show off their dance moves, leave a red memory on the bathroom mirror, and, after a round of fireworkd, go back home, where they have burgers and fries while still wearing their party outfits. Among the pieces showcased throughout the ad are a nude mini dress with all over stripe design with silver sequin detail, a gold mini dress with sequin and cowl neck detail, different co-ords, jumpsuits, footwear, outerwear and more.

The fashion retailer now offers a variety of coats and jackets from £30, unlimited next-day delivery for a year with just £9.99, 20% off your first order with the code gimme20, as well as free UK returns.