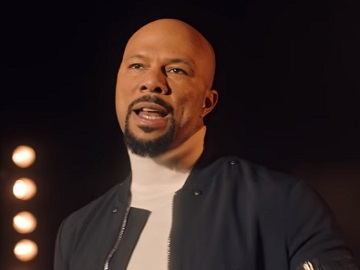 Microsoft celebrates, in a new commercial starring Common, individuals and organizations that use Microsoft technology to change lives and inspire us all to see the possibility within emerging technologies.

The 60-second ad features the recording artist, who’s also an actor, poet and film producer, onstage in a theater, giving a speech, but with no audience. “Today, right now, you have more power at your fingertips than entire generations that came before you. Think about that. That’s what technology really is. It’s possibility. It’s adaptability. It’s capability. But in the end, it’s only a tool. What’s a hammer without a person who swings it? It’s not about what technology can do. It’s about what you can do with it.”, Common says, going on by making a series of analogies saying that people are the voice and technology is the microphone and, when people are the artist, technology is the paintbrush.

He then makes reference to elements part of a future we “always dreamed of”, like “Mixed Reality that changes how we see the world” and “AI empowering us to change the world we see”.

“You have more power at your fingertips than entire generations that came before you. So here’s the question: what will you do with it?”, Rapper asks at the end of the spot, before the tagline “Empowering Innovation” flashes across the screen.

This is not the first Common’s collaboration with Microsoft. In the fall of 2008, he starred in a commercial for Microsoft’s Zune, comparing his new song at the time “Universal Mind Control” to “Planet Rock”, a song from hip hop pioneer Afrika Bambaataa, and in December 2008, he launched a new clothing line in partnership with Microsoft titled “Softwear”, based on 1980s computing.