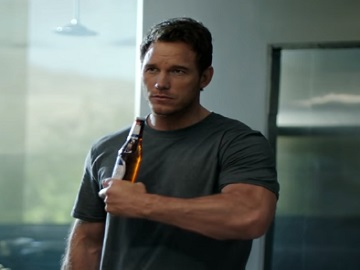 The 60-second spot, done by FCB Chicago and titled “The Perfect Fit”, features the Guardians of the Galaxy star training for his “big” role in a Michelob ULTRA commercial and bragging about it to everyone. In one of the scenes, shot in a grocery store, Pratt puts a 6-pack of Michelob ULTRA on the counter and tells the checker he is the new spokesman. The latter answers he is the employee of the month, which makes Pratt say “it’s not a competition”.

“You got to be fit. You got to love Michelob ULTRA. It’s not like anyone else could do this.” – Pratt is also heard saying to a taxi driver while on screen he is seen lifting a very small weight and flexing with a bottle of Michelob ULTRA in his hand. Finally, he arrives on a set where the casting for the commercial takes place and, after telling his name to the production assistant, who didn’t recognize him, comes to realize that he auditions for an extra, along like dozens of other people.

Azania Andrews, vice president, Michelob ULTRA, stated in a press release that they are “really excited to partner with Chris Pratt”, of whom she said he perfectly embodies the brand’s spirit thanks to his “dynamic personality and passion for fitness”, and that he is “the ideal choice” to share the brand’s message with viewers around the country.

The beer brand will run a second spot during the Big Game, which takes place on February 4th and is broadcast on NBC. Dubbed “I Like Beer”, the spot will also feature, in addition to Pratt, US Open Golf Champion Brooks Koepka, 2017 NYC Marathon winner Shalane Flanagan, and 11-time World Surf League Champion Kelly Slater singing all together along to “I Like Beer” re-recorded by country music artist Jon Pardi, which is a new anthem for Michelob ULTRA.