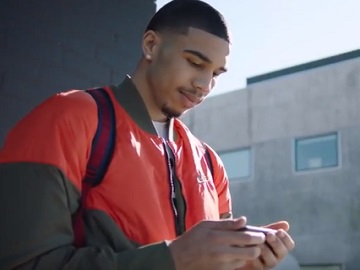 Boston’s prized rookie appears in several spots for the company, promoting its “fast, reliable network” that covers 99% of people in the US based on talk and text. In the first episode, which labels “Not keeping in contact with your trainer” as a Rookie Move, he talks about how important is for him to stay in touch with his coach even when he’s not nearby. Tatum is seen throwing a basket and apparently having no one to witness his achievements, not even the guy mopping the court. It soon turns out Tatum uses MetroPCS to connect with his trainer via video calls when away and ask him his opinion about his shoots.

“It would be a rookie move for me not to train as hard as I can, but it’s also important for me to put in the right word. That’s why I have to stay connected with my coach even when he’s not around.” Tatum says at the end of the spot.

A native of St. Louis, Missouri, Jayson Tatum, who is Gatorade National Player of the Year 2016, attended Chaminade, where he was rated as a five-star recruit, played with the Duke Blue Devils men’s basketball team in 2016–2017, and in 2017 entered the NBA Draft and was selected with the third overall pick by the Boston Celtics.