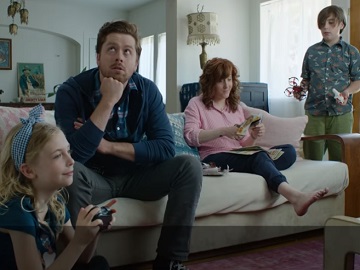 Mercury Insurance continues its “The Cheapskates” campaign with a series of new commercials, highlighting that there is “a smarter way to save”.

One of the spots features a family sharing one set of batteries in order to save money. The daughter is seen using them in her videogame remote control. When her brother shows up, asking their mom if he can play now, too, the mother, who’s cutting out vouchers, answers that it’s his sister’s turn to play. However, when the girl’s time is up, it turns out the father has been waiting in line, too, for the batteries to put them in the TV remote control.

“Sharing one set of batteries? There’s a smarter way to save. Switch to Mercury!” onscreen lines read throughout the ad.

The Cheapskates campaign features various other bizarre ways to save money, such as using a bowl to cut your kid’s hair, using the neighbor’s sprinklers for showering, sharing your clothes with your significant other, relying on free samples to fill your dinner plate, offering the same gift on couple anniversary, and more.

Previous: Bank of America Matt Damon Commercial Song – What Would You Like The Power To Do?
Next: Mercedes-Benz Service and Genuine Parts Commercial