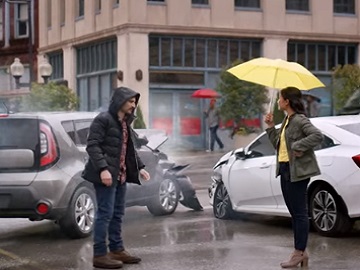 Mercury Insurance urges people to “Say goodbyeee to slow service… and save money!” in its latest commercial, which highlights that Mercury can save your money without forcing you to compromise on service.

The 30-second spot features a man apologizing to a woman whose car he hit at a crossroads. She says she got Mercury Insurance, a “great” company, that helped her save “a lot of money”, while a Mercury Insurance agent is handing her the keys of a rental car for her to use until the damage is fixed. The man is left wondering why his insurance doesn’t include a rental car, as well. Standing near his damaged car, in the rain, he is now asked by the woman why he made a right from the left lane.

The ad, also informing that Mercury can’t deliver a rental car to the scene of an accident, but will do everything they can to get you back on the road, fast, ends with the man waving to the woman, who’s leaving the scene of the accident at the wheel of a rental car, and uttering a scream after seeing a small explosion under his car’s hood.