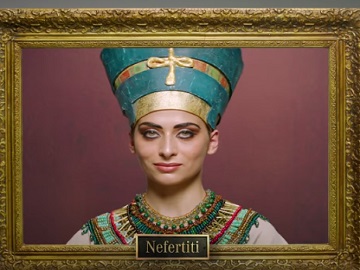 Mercedes-Benz has launched a short film on the occasion of the International Women’s Day to celebrate all strong women all over the world and the achievements of a series of remarkable women who have proves courage and pioneering spirit and had a lasting effect on our society and our lives.

“We are powerful, yet mysterious. We are pioneers and innovators. Nobel prize winners and academics. We are brave and we are visionaries. Artists and revolutionaries. We are women and we have the power to change the world. It’s in all of us.” the voiceover says on the 60-second spot, titled “Iconic You”, which features a woman being transformed by a team of makeup artists in the Egyptian Queen Nefertiti, automotive pioneer Bertha Benz, Nobel Prize winner and scientist Marie Curie, pilot and women’s rights activist Amelia Earhart and influential artist Frida Kahlo, who have moved forwards and paved the way in their fields, influencing politics, achieving scientific progress, developing groundbreaking technologies, and creating revolutionary pieces of art.

The automaker also aims at encouraging women to believe in the power they have to change the world and inspiring them to take action, safe in the knowledge that nothing is impossible.