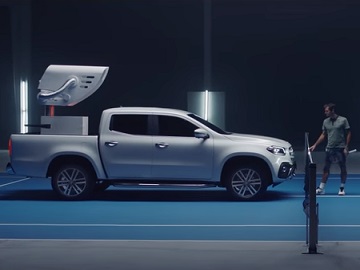 Mercedes-Benz showcases the new X-Class in a duel with Roger Federer in a new commercial.

The global tennis star (aged 36), who was the world number one for almost six years, collecting nineteen Grand Slam titles, returned to center stage in the tennis circus after a knee operation and a half-year break, beating his permanent rival, Rafael Nadal, in the final of the Australian Open 2017. The new spot features him practicing his skills with the new X-Class, which is – according to the automaker – “shifting the boundaries of the classic pick-up world” by enhancing “the strengths of a medium-sized pick-up with the typical Mercedes-Benz attributes of driving dynamics, comfort, design, safety, networking and all-encompassing individualization”.

Mercedes-Benz teamed up with Federer in August 2016 for a hilarious commercial aimed at highlighting the extensive and far-reaching history of its SL Roadster. In order to promote the X-Class and show that it can handle almost any terrain, the automobile manufacturer has teamed up also with Sebastian Steudtner, one of the world’s best big wave surfers, presenting them as “two against the forces of nature”.