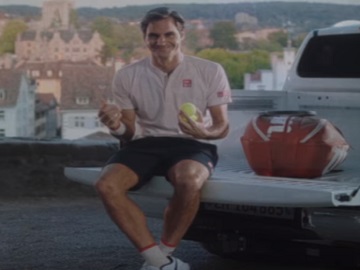 Roger Federer is back to the small screen in a new commercial for Mercedes-Benz X-Class. The automaker gives viewers a glimpse into a training day out of the tennis legend, in Zurich, Switzerland, with the X-Class as his perfect partner.

The spot opens with Federer finding the lock on the gate to his training court and deciding to train in a different way. After getting to the wheel of his X-Class and buckling up, he enjoys a speedy ride through the city streets and, during his training sessions held out and about, he helps some women beating their rugs, presses some buttons to change the color at a traffic light, holds a tram door open for a young woman. Throughout his journey, he also manages to smash a window, distract some tourists and drive fast to catch one of the balls he threw.

Earlier this year, in January, Mercedes-Benz showcased the new X-Class in a commercial featuring the tennis champion in a duel with the car.

Mercedes-Benz teamed up with Federer in August 2016 for a hilarious commercial aimed at highlighting the extensive and far-reaching history of its SL Roadster. In order to promote the X-Class and show that it can handle almost any terrain, the automobile manufacturer has teamed up also with Sebastian Steudtner, one of the world’s best big wave surfers, presenting them as “two against the forces of nature”.

Federer, who was the world number one for almost six years, collecting nineteen Grand Slam titles, returned to center stage in the tennis circus in 2017, after a knee operation and a half-year break, beating his permanent rival, Rafael Nadal, in the final of the Australian Open 2017.

Earlier this week, on Thursday, November 15, faced the only undefeated player from his group, Kevin Anderson, and secured his spot in Semifinals at ATP Nitto World Tour Finals. The 37-year old Swiss star will try to beat Alexander Zverev at the Nitto ATP Finals for the second consecutive year, today, on Saturday, November 16.