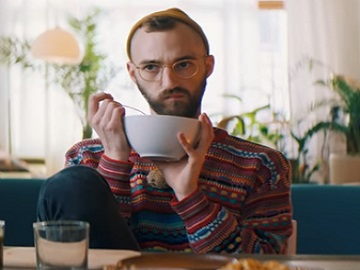 Mercedes-Benz advertises, in its latest ad, the Mercedes me carsharing app, which allows a driver to share their vehicle with a specified group of users.

The 60-second spot, aimed at highlighting that, with the new MBUX, the 2018 Mercedes-Benz A-Class is set up for private carsharing, features several roommates who are all very different. While a bearded guy is having pâté on bread at breakfast, his roommate, who’s holding a bowl of cereals, is looking at him almost grossed by the idea of eating such a thing. Behind them, a third guy is doing yoga and a girl is entering the house and throws herself on the couch. Another roommate, who seems to be into healthy living, shows up in the living room doing a live video and then taking a photo of her breakfast, consisting in lots of fruits, to post it on social media. The girl already sitting at the table, who seems to be a punker or rocker, is definitely not the type willing to take selfies and share everything with everybody.

Carsharing with the new Mercedes-Benz User Experience,” the voiceover says throughout the ad, which ends with the rocker driving a roommate’s Mercedes-Benz through the city streets at night.

The automaker informs that MBUX is used in the entire new compact car generation from Mercedes-Benz and will enter series production in spring 2018 in the new A-class.