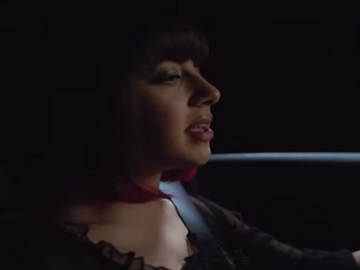 The 60-second ad opens with the British singer-songwriter in a Mercedes-Benz asking Mercedes to take her to the French Quarter. She is then seen ghost-hunting in a building from the historic neighborhood of New Orleans, while a woman explains that, in that area, they claim that about 90% of buildings are haunted, and tells her how to act in case she feels nervous. Back in her car, after the experience, Charli smiles thinking about she has just done and happy that she crossed “Ghost Hunt in NOLA” off her Bucket List in the all-new A-Class.

“What’s on your bucket list? The A-Class might help you cross it off” onscreen lines read at the end of the commercial, which also instructs viewers on how to enter the Bucket List contest.

This is the second installment in the series of ads promoting the A-Class Bucket List contest, featuring celebrities. The first one, released a week ago, follows tennis champion Sloane Stephens crossing something off her bucket list, too: find the best slice in New York City.

The A-Class features Mercedes-Benz User Experience (MBUX), which is an advanced operating system technology that “lets you interact with your car in the most intuitive, natural way,” according to the brand. The MBUX comes with a digitally customizable cabin with dual widescreen displays, natural language voice control with speech recognition and integrated Artificial Intelligence that learns and adapts over time.