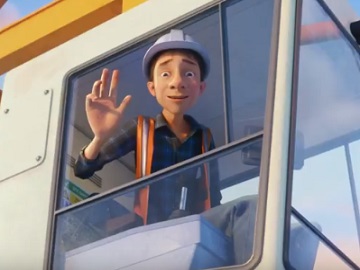 Four years after the launch of “Sweeet” campaign, which featured puppies and kittens crawling out of biscuit packs, McVitie’s has launched a new ad campaign and a new slogan, “Sweeter Together”, in an effort of new brand positioning.

Created by agency Grey London, the £9.7m campaign kicked off with a 60-second animated spot aimed at highlighting the power of a simple gesture of sharing biscuits to bring people together. The protagonist is a tower crane operator who works high above the ground, so quite far from his colleagues. Watching them getting together for tea breaks and McVitie’s biscuits, he tries to get their attention by waving at them, but he seems to be unnoticed until one day, when he finds a cuppa and snacks on a steal beam. His mood instantly changes and he doesn’t feel lonely anymore, proving what the line flashing then across the screen reads: “sometimes the little things are actually the really big things”.

Director duo Smith and Foulkes managed the direction through Nexus and the soundtrack music is by SoundTree’s Peter Raeburn.

This spot, which aired today, March 9, during Good Morning Britain on ITV, will be followed by a second one, dubbed “Brows”, revolving around a woman who feels nervous about her first day in a new job, which will be released later this month, on March 19, and which will promote the McVitie’s Jaffa Cakes.

The campaign, set to run on TV, social and in-store, is backed with a text-to-win competition open to any consumer who buys a pack of McVitie’s biscuits.