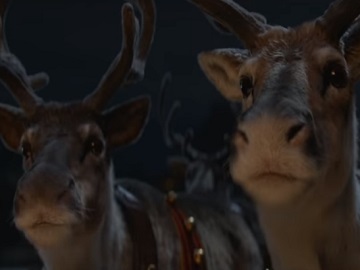 McDonald’s UK has launched its Christmas advert and has managed to impress thousands of people, many describing it as this year’s best Christmas ad.

The 90-second spot, written by Leo Burnett and directed by James Rouse through Outsider, follows Santa on Christmas Eve delivering gifts to children and enjoying glasses of milk and mince pies almost everywhere he goes. His reindeer though, are not that lucky since no one leaves some carrots for them. Noticing that Rudolph and his fellows are more and more saddened by the lack of a treat for them, Father Christmas decides to take action into his own hands after spotting a McDonald’s down on a street. He enters the restaurant and grabs a sack full of carrots (packaged as “Reindeer Treats”) for his hard-working team of flying reindeer.

Released with the tagline “Are You #ReindeerReady?”, the film is an attempt to revamp the fast-food chain’s unhealthy image, highlighting that it also provides healthy options. Carrots can be chosen as a side, instead of fries, when you order a Happy Meal for children.

Those who will go to a McDonald’s on Christmas Eve have the chance to get a free packet of “Reindeer Treats” for free.

To help you get #ReindeerReady, McDonald’s have sourced a select number of (enlarged) jumpers, straight from the elves at Father Christmas’ workshop and are giving you the opportunity to win one. For a chance to win one of the exclusives jumpers, people must enter a competition online. Closing date for all draws is the 14th of December 2018.