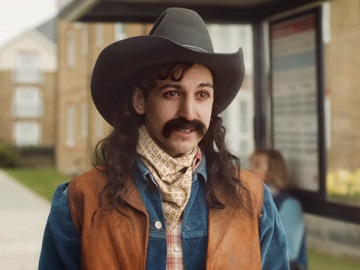 McDonald’s UK heralds, in a new ad, that Great Tastes of America is back, with a range of burgers inspired by the USA, highlighting that The Tex Mex Stack will be around until 12th June.

The 30-second spot features two guys in a bus stop talking about the Tex Mex Stack. Asked what he would like to have for lunch, one of them says that Great Tastes of America is back at McDonald’s and that he is going to get the Tex Mex Stack, which is made with “two beef burgers, crispy nachos, Pepper Jack cheese, smoky sauce, all in a spicy bun.” As he lists the ingredients, he turns into a cowboy, and so does his friend, who is seen riding a mechanical bull without head.