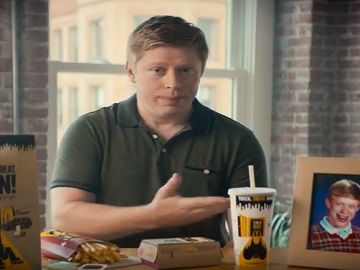 Rooted in the idea that “If he’s lucky enough to win, you’re lucky enough to win,” the 30-second spot features the 29-year-old man in an apartment, with his yearbook photo, that made him famous back in 2012, near him and several McDonald’s select products in front of him. “A while back, my yearbook photo went viral. And not in a good way. Now they call me ‘Bad Luck Brian’,” Kyle says, giving then viewers a glimpse into the wide variety of Internet memes created based on his photo and revealing then that his real name is Kyle.

After peeling the game piece on one of the menu items, he discovers he won a free Mac, which brings a large smile on his face. The voiceover adds, at the end of the spot, the campaign’s tagline, “McDonald’s Trick. Treat. Win! game – With 1 in 4 odds of instantly winning, you won’t need luck”.

Kyle Craven’s yearbook photo was posted on Reddit, in 2012, and quickly became a popular meme on social media networks. The image was also turned into T-shirts, stuffed animals and novelty items sold by Walmart and Hot Topic.

Information on how to play McDonald’s Trick. Treat. Win! game, as well as answers to frequently asked questions, are available at tricktreatwin.com. You can also play it on the go with the McDonald’s App, which is available for download on the App Store and Google Play. The Sweepstakes ends October 31.